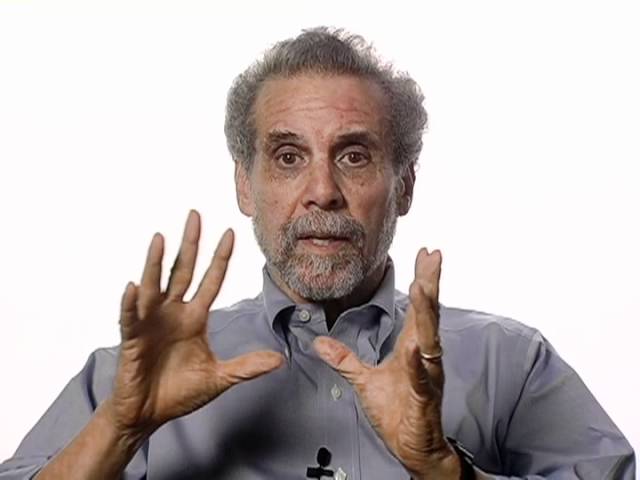 Question: What is emotional intelligence?

Daniel Goleman: Emotional intelligence refers to how well we handle ourselves and our relationships, the 4 domains. Self-awareness, knowing what we’re feeling, why we’re feeling it, which is a basis of, for example, good intuition, good decision-making. Also, it’s a moral compass. Say, in part, is self-management, which means handling your distressing emotions in effective ways so that they don’t cripple you, they don’t get in the way of what you’re doing, and yet, attuning them… to them when you need to so that you learn what you must. Every emotion has a function. Also, [marshalling] positive emotions, getting ourselves, you know, involved, enthused about what we’re doing, aligning our actions with our passions. The third is empathy, knowing what someone else is feeling. And the fourth is putting that altogether in skilled relationship. So that’s what I mean by emotional intelligence. There’re many definitions out there. The part of the brain, it turns out, that supports emotional and social intelligence is actually the last circuitry of the brain to become anatomically mature. And because the neuroplasticity of the brain shapes itself according to repeated experiences, so my argument is, hey, we should be teaching kids regularly overtime, in a systematic way, self-awareness, self-management, empathy, and social skill. In fact, there, now, enough programs and they’ve been around enough in schools that they’re about to publish a huge meta analysis, looking at hundreds of schools and kids that had the program versus those that don’t. Guess what? All anti-social behavior, you know, disruption in class, find that… it goes down 10%. Pro-social behavior, liking school, well-behave, up 10%. Academic achievement scores, up 11%. So it really pays. Executive function, which is mediated by the prefrontal lobe, both helps you manage your emotions and helps you pay attention. So as kids learn these skills, they also learn learning… basic learning skills. I think that the fact that that was an argument was one thing that caught people’s attention. Then, there was a little chapter on… called managing with heart, which argued that leaders who were sons of a bitch were actually defeating the company’s own mission. And I think that made a lot of people happy because they work for people like that. I don’t know… Some people gave it to other people because they thought they needed help in this domain. I’m sure there’re a zillion reasons why people like the book.

Daniel Goleman: I hope more. I know IQ has been going up for a hundred years as children encounter more sophisticated cognitive environment as they grow. I don’t know that we’re becoming more emotionally intelligent. I like to hope we would but I think that the number of intergroup wars going on, the intergroup hatred going on, the, you know, levels of familial abuse, in other words, indicators of emotions out of control in dangerous ways don’t look that great, which is why I’m a very strong proponent of getting these social, emotional learning programs in every school worldwide.

Daniel Goleman: Well, I get asked that question in a different way, which is, are women more emotionally intelligent than men? And you have to remember that emotional intelligence is a range of abilities, self-awareness, emotional self-management, empathy, social skills.

Read the Full Transcript at: https://bigthink.com/videos/daniel-goleman-introduces-emotional-intelligence

Jordyn Wieber – How One Olympian Turned Devastation into Inspiration #shorts #olympics
The Secret Weapon That Could Help Save Bees
19 Common Things Science Hasn’t Figured Out – Mental Floss List Show Ep. 525
Where is Scandinavia?
The method that can “prove” almost anything – James A. Smith