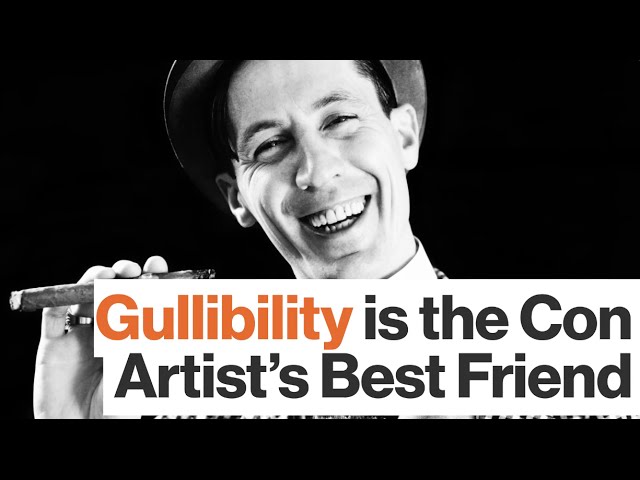 TED & Talks
Share on Facebook
Share on Twitter
Share on Pinterest
Share on LinkedIn
What Psychological Traits Does the Con Artist Look for in Victims?
Watch the newest video from Big Think: https://bigth.ink/NewVideo
Join Big Think Edge for exclusive videos: https://bigth.ink/Edge
———————————————————————————-
The history of the term “con artist” illuminates some essential traits of this lamentable profession. Maria Konnikova explains that the first con artist was a Manhattan watch thief who would prey on the goodwill of his victims, asking to borrow their watch until the following day. Of course the watch was never returned and the confidence invested by the victim in the thief was also lost. Indeed the con artist is more of a psychologist than a thief. Con artists will never steal anything from you, says Konnikova, they’ll convince you to hand it over freely.
———————————————————————————-
MARIA KONNIKOVA:
Maria Konnikova is the author of two New York Times bestsellers: The Confidence Game , winner of the 2016 Robert P. Balles Prize in Critical Thinking, and Mastermind: How to Think Like Sherlock Holmes , an Anthony and Agatha Award finalist. Her new book, The Biggest Bluff , will be out from Penguin Press on June 23, 2020. While researching The Biggest Bluff , Konnikova became an international poker champion and the winner of over $300,000 in tournament earnings—and inadvertently turned into a professional poker player. She is a regular contributing writer for The New Yorker , and her writing has been featured in Best American Science and Nature Writing and has been translated into over twenty languages. Maria also hosts the podcast The Grift from Panoply Media, a show that explores con artists and the lives they ruin, and is currently a visiting fellow at NYU’s School of Journalism. She graduated from Harvard University and received her PhD in psychology from Columbia University.

———————————————————————————-
TRANSCRIPT:
Maria Konnikova: One of the hallmarks of the good con artist is that it never feels like they’re taking advantage of you. They are never taking anything from you. You give it to them willingly. So actually the term confidence artist came out of a man in the 1800s in New York City who would walk around on the streets of Manhattan dressed as a very dapper gentleman and he would approach other likewise dapper gentlemen and say, “Have you the confidence in me to lend me your watch until tomorrow?” What a strange request, right? It’s such a loaded question. What kind of a person are you? What kind of a world and society do we live in? Are you abiding by the gentleman’s code of conduct? Are you going to trust me? Are you going to give me your confidence? Well, people would give them their watches and he obviously had no intention of ever giving them back. By the time that he was finally caught he had lots of watches to his name and gave birth to the name confidence man.

You give them your confidence; they don’t take it. You give them money; they never take it from you. I mean think about someone like Bernie Madoff, people had to beg to invest with him. He would say no. He would turn them away. Sometimes people waited for years before he finally accepted their money. And he did it as if he were doing them a huge favor. “Okay fine I’ll take your money.” And they were so grateful. “Please take a more Bernie, take more.” Because he was doing them such a huge favor.

One of the hallmarks of the confidence artist is something called Machiavellianism. It has to do with manipulating people for your own ends; getting them to do what you want them to do but without their knowledge so that they don’t realize they’re being manipulated; so that they think that everything they’re doing is of their own volition. People hate feeling manipulated. The moment you think you’re being manipulated you drop out you say “Hey, no one tells me what to do. Who are you to manipulating me?” And so the con doesn’t work. So the trick is how do I give you the germ of the idea so that you think it’s your idea? How do I set up a situation so that it’s your proposal not my proposal so that you’re the one who’s in charge. You would be shocked if anyone told you otherwise. In fact often times when people say hey do you realize that this might be a con? You’ll laugh and you say absolutely not, are you insane? This is totally legitimate. Besides, it was my idea……….

To read the transcript, please go to https://bigthink.com/videos/maria-konnikova-your-gullibility-is-the-con-artists-best-friend

10 Ways Your Home Can Kill You!
The Secrets of Feynman Diagrams
Feeding Frenzy – Paul McMahon
Wheeler Jump – Computerphile
How To Capture Black Holes