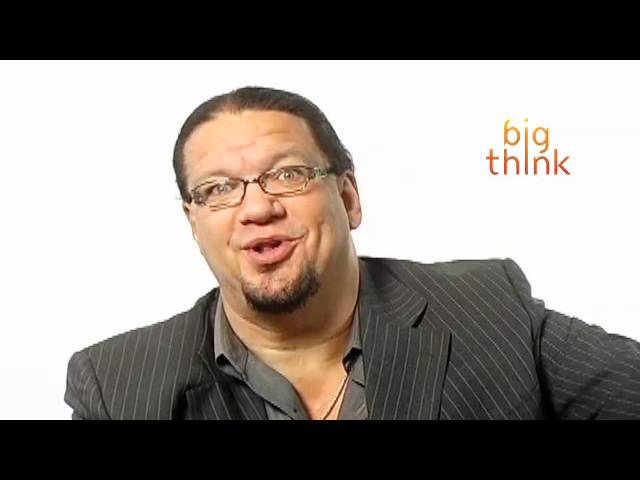 Penn Jillette is a cultural phenomenon as a solo personality and as half of the world-famous Emmy Award­-winning magic duo Penn & Teller. His solo exposure is enormous: from Howard Stern to Glenn Beck to the Op-Ed pages of The New York Times, The Wall Street Journal, and the Los Angeles Times. He has appeared on Dancing with the Stars, MTV Cribs, and Chelsea Lately and hosted the NBC game show Identity. As part of Penn & Teller, he has appeared more than twenty times on David Letterman, as well as on several other TV shows, from The Simpsons and Friends to Top Chef and The View. He co-hosts the controversial series Penn & Teller: Bullshit!, which has been nominated for sixteen Emmy Awards. He is currently co host of the Discovery Channel’s Penn & Teller Tell a Lie and the author of God, No! and Presto!
———————————————————————————-
TRANSCRIPT:

Question: How would you characterize your relationship with Teller?

Penn Jillette: Business partners, I mean, the most important thing about our partnership is it’s not based on cuddly love and affection. I mean, over 35 years, I mean, by many definitions he has to be my best friend. I mean, he’s the person I talk to when my mom and dad died. He was there when my, you know, right after my children were born. He’s all of those things but we’re much more like two guys who own a dry cleaning business, you know, many of your show business partnerships start in love.

I mean, Lennon and McCartney had a love affair pretty clearly. Martin and Lewis had a love affair, Jagger and Richards had a love affair. And when that goes south, when all of a sudden love fades away, it becomes a huge explosion. I mean, Lennon and McCartney hated each other. And with working with Teller there was no real attraction. We didn’t want to spend all our time together. We spent all our time together but we weren’t dying to do that. What we wanted to do was do a show together and we had much more respect than affection.

And I think there’s a lot to be learned from how much stronger respect is than affection. For one, we understand respect and we don’t understand affection. So it’s a little easier to get your mind around and be able to manipulate. And so when Teller and I don’t like each other, when we’re not getting along, it doesn’t change much of anything. You know, it’s like when you work at the 7-11, you don’t quite get along with the guy who’s cleaning the Slurpee machine that day. You don’t care that much, your life goes on.

So he’s become my best friend but in a very circuitous route through respect and through work.

Question: What do you and Teller each contribute to the partnership?

Penn Jillette: think if you were to picture what we do you’d probably be pretty right. I tend to have the responsibility for what I say. There are lines here and there that are Teller’s—there are moments in the shape of the plot of things that are Teller’s—but for the most part I’m in charge of what Isay. And for the most part Teller is in charge of the magic. Now there are great lines in the show that came from Teller and there are slightly clever magic moments that come from me and we do work together on things.

But those are really the responsibilities. If you wanted to break it down in really traditional terms I think you would see Teller is kind of the director… kind of directs the show and I don’t care very much about staging, lights, how things look. In my mind I’m always doing a radio show.

Britain once forgot how long an inch is
What Really Goes Into Storing Food for the Winter?
How to get better at gift-giving #shorts #tedx
How To Capture Black Holes
Wheeler Jump – Computerphile