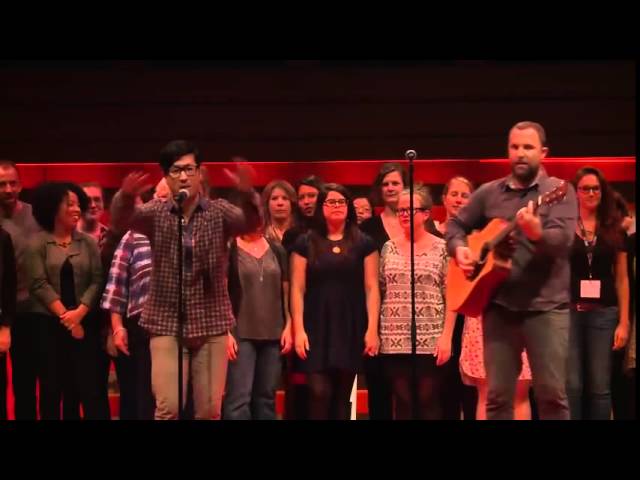 TED & Talks
Share on Facebook
Share on Twitter
Share on Pinterest
Share on LinkedIn
his talk was given at a local TEDx event, produced independently of the TED Conferences. Choir!Choir!Choir! is a no-commitment choir based in Toronto, co-founded by Nobu Adilman and Daveed Goldman. At TEDxToronto, fifty-four members of the choir took the stage, with Nobu and Daveed leading our audience in a one-thousand person sing-along to Patti Smith’s “Because The Night.” Meeting regularly to sing new arrangements of pop songs, Choir!Choir!Choir! boasts dedicated and passionate membership of inspired singers from in and around Toronto and has quickly become a citywide phenomenon.

Choir!Choir!Choir! is a no-commitment choir based in Toronto, co-founded by Nobu Adilman and Daveed Goldman in 2011. Meeting twice weekly in downtown bars, it has quickly become a citywide phenomenon. Bryan Adams has tweeted his praise; they’ve sung with Patti Smith at the Art Gallery of Ontario; and most recently rocked the Juno Awards with Tegan & Sara on Closer, the group’s Single of the Year. To date, they have recorded over 250 awesome songs that include Bruce Springsteen, Haim, The Smiths, Big Star, Daft Punk, and so much more.

I Can Guess Your Card – Why It Works
10 Ways Your Home Can Kill You!
The Most Extreme Explosion in the Universe
7 MYTHS You Still Believe – Biggest Lies Movies Taught You
30 Interesting Facts about the Ocean – mental_floss List Show Ep. 509