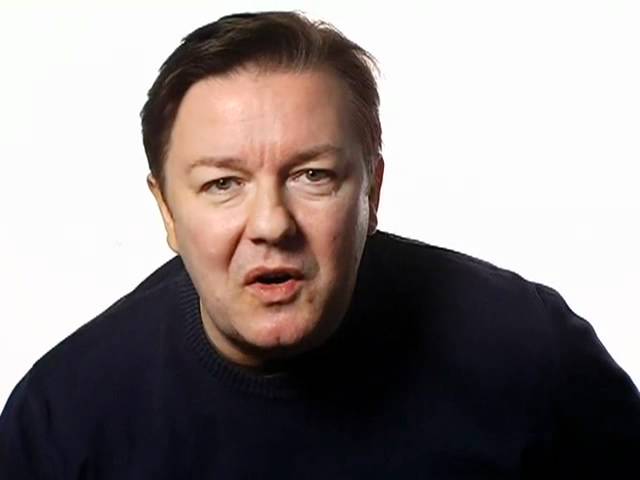 Ricky Gervais is an English comedian, author, actor, director, producer, screenwriter and former pop musician. He achieved mainstream fame with his television series The Office and the subsequent series Extras, both of which he co-wrote and co-directed with friend and collaborator, Stephen Merchant. Besides writing and directing the shows, Gervais also played the lead roles of David Brent in The Office and Andy Millman in Extras. Gervais has also appeared in several Hollywood films, including For Your Consideration, Stardust, Night at the Museum and Ghost Town.
———————————————————————————-
TRANSCRIPT:

Ricky Gervais: Of course. And it’s still based on the same principles of what I think comedy is about. I think there’s a big difference between comedy and sense of humor. And I think a comedian’s job isn’t just to make people laugh. That’s easy, that could be a reflex.

You see some comedians; it’s the rhythm. They could even throw in a fake punch line, they get a laugh. And I think it’s about making people think about it, and why it’s funny. I think comedy is about empathy. I can’t laugh with people I don’t like. I think you should know to be above the audience.

And there’s nothing remotely funny about seeing unfeasibly handsome, brilliant people come out and tell you why they’re brilliant. I want to see parts losing its way, falling over, and getting back up and dusting himself up. And you also got to see that humanity, that sort of struggle in anything, really. As opposed to changing my personality. Now I don’t but, of course, everything you do has got a persona.

Chat shows playing a sort of characters. It’s not completely me. You know, I never let my guard down when I act. When I’m on Jon Stewart, I don’t act completely like I do with my friends. You know, you still edit yourself. You’re still present.

Stand-up, again, is a persona. I play a brasher, more arrogant, more confident version of myself. And then, there’s another level on that, that I usually play the guy who says the wrong thing. The target of my stand-up scene, likely soft targets, but, of course, the target is the audience’s own prejudice and middle class angst and me. I’m always the butt of a joke. I’m ignorant. I come down on the wrong side.

Nelson Mandela, what a great guy, often gets a round of applause, incarcerate for over 25 years, released in 1990. He’s been out now for 19 years. And he hasn’t reoffended. I think he’s going straight, which shows you prison does work.

I play getting it wrong. And then, in the characters I play, from David Brent to Andy Millman, Dr. Pincus in Ghost Town, there’re variations of each other. I always play that part, that wisecracker in the face of adversity. And I don’t apologize for that.

I’ve never see this thing about an actor trying to show his versatility. To who? To a casting director? I cast myself. To the audience? I don’t care. All my favorite people have done one thing well, forever. Woody Allen, same character. Bob Hope, same character. Groucho Marx, same character. Different situations.

Even great actors, they play versions of themselves. They play it with their voice; Dustin Hoffman. Oh, they wear three different wigs. Who cares, you know. Things like, I don’t know, sketches; they don’t resonate. They don’t mean as much as a character that’s got a full development and a narrative.

My outlet has always been the other characters that I create in “The Office” excites me much more to be the creator and the director of every other character in “The Office” than me, putting the wig on and doing it. That’s a period of victory for me because you can’t suspend your disbelief. So that’s important to me. Realism is always been important to me.

What If The World Lost Oxygen For 5 Seconds?
The Furnace Bots | Think Like A Coder, Ep 3
How Not to be a Slave to Your Brain: Mindfulness for Mental Health | Mark Epstein | Big Think
Andrew Bastawrous: Get your next eye exam on a smartphone
Egg Experiment to Demonstrate Inertia