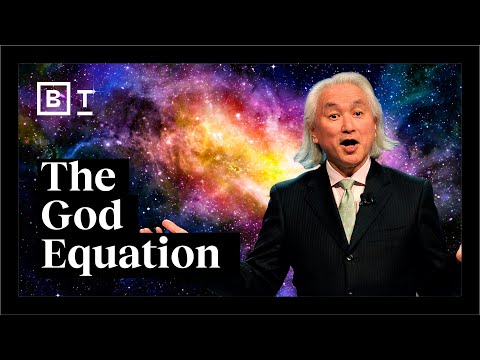 This theory, also known as the God Equation, would unify all the basic concepts of physics into one. According to Kaku, the best, most “mathematically consistent” candidate so far is string theory, but there are objections.

Dr. Michio Kaku is the co-founder of string field theory, and is one of the most widely recognized scientists in the world today. He has written 4 New York Times Best Sellers, is the science correspondent for CBS This Morning and has hosted numerous science specials for BBC-TV, the Discovery/Science Channel. His radio show broadcasts to 100 radio stations every week. Dr. Kaku holds the Henry Semat Chair and Professorship in theoretical physics at the City College of New York (CUNY), where he has taught for over 25 years. He has also been a visiting professor at the Institute for Advanced Study as well as New York University (NYU).

MICHIO KAKU: What is the mind of God, that Albert Einstein chased after for 30 years of his life? Einstein wanted an equation that would unify gravity, electromagnetic force, and the two nuclear forces. He wanted unification of all four forces into one theory. The theory of everything, the God Equation.

My name is professor Michio Kaku. I’m a professor of theoretical physics at the City University of New York, and author of the recent book “The God Equation: The Quest for the Theory of Everything.” Leonard Euler, one of the great mathematicians of human history, found one equation which summarized the fundamental constants of math. One plus e to the i pi equals zero. People call that the God Equation of Mathematics. Now of course the God Equation is useless as a practical application, but think now of a God Equation for physics. Physics is quite useful. When Newton worked out the mechanics of moving objects and gravity, he helped to lay the groundwork for the Industrial Revolution. And then Maxwell and Faraday united electricity and magnetism to give us the electromagnetic force. The electric revolution of dynamos, generators, and light bulbs. And now we have e equals mc-squared, which helped to pave the way for the nuclear force. Each time a force was unraveled, it changed human history. And now, we want to put the whole thing together into the God Equation, fulfilling Einstein’s original dream.

The God Equation, just like the God Equation of Mathematics, should unify the basic concepts of physics into one equation. Now, what are these basic concepts? Relativity and the quantum theory. The problem is, the quantum theory does not unify well with general activity. See general activity of Einstein is based on smooth surfaces. The quantum theory is based on chopping things up into particles. That’s the opposite of Einstein’s philosophy of smooth curves representing space-time. That’s why it’s so difficult. It’s no exaggeration to say that the greatest minds of the entire human race have made proposals for this grand final theory of everything. Each one was shown to be anomalous or divergent. So far, there’s only one theory which has survived every challenge: string theory, which is what I do for a living. Now, what is string theory? From a distance, an electron looks like a dot. The neutrino is another dot. The quark is another dot. We have all these dot particles. How many dot particles? Hundreds of them. But, string theory says if you can peer into the heart of an electron, you will see that it’s a rubber band. A tiny, tiny vibrating string, very similar to a guitar string. There’s an infinite number of vibrations and that is why we have subatomic particles. The subatomic particles each correspond to a different set of vibrations of a rubber band. String theory allows you to rotate particles into each other turning electrons into neutrinos, neutrinos into quarks, and the theory remains the same. That is the symmetry of the string, and that’s why it’s so powerful. A simple idea that encapsulates the entire universe.

Now my personal point of view is, string theory is…

How we can use the hiring process to bring out the best in people | The Way We Work, a TED series
POKÉ BALL BRA!! – Game LÜT #2
Egg Experiment to Demonstrate Inertia
Just Move The 4 #shorts
Jordyn Wieber – How One Olympian Turned Devastation into Inspiration #shorts #olympics