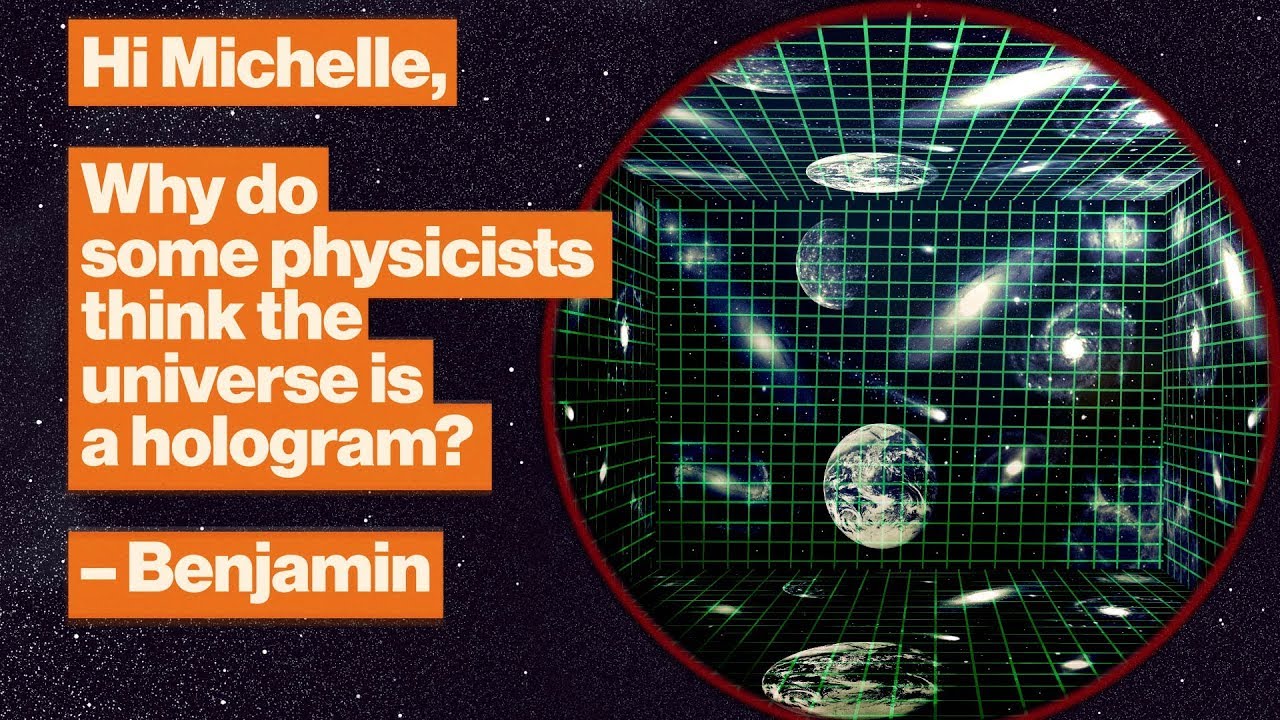 TED & Talks
Share on Facebook
Share on Twitter
Share on Pinterest
Share on LinkedIn
Is the universe a hologram? The strange physics of black holes
New videos DAILY: https://bigth.ink
Join Big Think Edge for exclusive video lessons from top thinkers and doers: https://bigth.ink/Edge
———————————————————————————-
Since energy cannot be destroyed, only transformed, some argue that information — arguably a form of energy — cannot be destroyed either. So then, what happens to information when it is absorbed into a black hole? Scientists don’t know for certain, but some posit that it may be possible for it to leak away from the black hole over time. Black holes may hold information in a two-dimensional manner similar to a hologram, which take on three dimensions when light is shone through them. Some theorize that the underlying nature of reality can be glimpsed through black holes — that all the information about the entire universe is somehow held on a two-dimensional space of something.

Dr. Michelle Thaller is an astronomer who studies binary stars and the life cycles of stars. She is Assistant Director of Science Communication at NASA. She went to college at Harvard University, completed a post-doctoral research fellowship at the California Institute of Technology (Caltech) in Pasadena, Calif. then started working for the Jet Propulsion Laboratory’s (JPL) Spitzer Space Telescope. After a hugely successful mission, she moved on to NASA’s Goddard Space Flight Center (GSFC), in the Washington D.C. area. In her off-hours often puts on about 30lbs of Elizabethan garb and performs intricate Renaissance dances. For more information, visit
NASA.
———————————————————————————-
TRANSCRIPT:

MICHELLE THALLER: Black holes really are kind of getting to the very heart of our physics. And I believe that they’re kind of showing us the way that eventually we’re going to need different physics and new physics. People ask questions like, “What happens inside a black hole?” Or even, “What happens at the very boundary of a black hole, the event horizon, when light is absorbed?” And honestly, our physics is telling us a lot of contradictory things. And our image of what an event horizon really is may be changing. People like Stephen Hawking and Leonard Susskind have recently come up with this idea that a black hole should not be able to destroy information. O.K., what do we mean by information? Information can be almost anything.

All of the different atoms in my body have angular momentum, they have charge, they have mass. There’s all sorts of little bits of information that make me me. At the quantum mechanic level, the tiniest of levels, there are different amounts of energy, there are different probabilities that are contained in the structure of my matter. And information, in some ways is a form of energy. It’s actually a way that you can describe something which is somehow, in a strange way, a higher energy state than not being able to describe something. And so one of the questions is, “If energy really can’t be destroyed energy itself is something that is intrinsic in the universe, you can’t really created or destroy it is it possible that information is the same way? Is there really no way to actually destroy the information about what all of my subatomic particles are doing right now?”

So black holes kind of stare you right in the face. What a black hole supposedly does is it absorbs everything. Space and time bend into a black hole so that nothing can escape. That means that any information about the material that fell in is gone. The only thing we know about it is that as a black hole absorbs material, it gets more massive. It actually adds that mass to the mass of the black hole. And as that mass increases, the event horizon becomes larger. Basically, the area where space is so curved that you can’t get out begins to extend the more massive a black hole is. The most massive black holes we know of in the universe are many billions of times the mass of our sun. And the physical extent of this event horizon is about the size of our solar system, maybe like out to the planet Pluto.

So is it possible, then, if everything goes into a black hole and nothing ever comes out, space and time go inside the black hole and don’t come out? What happened to that information? And this has begun to make a lot of people wonder if we really have thought of black holes the wrong way. Maybe there isn’t an event horizon in the true sense. I actually had a friend of mine that studies black holes say, “Well, I’m not sure if they’re black. They m…

For the full transcript, check out https://bigthink.com/videos/black-holes