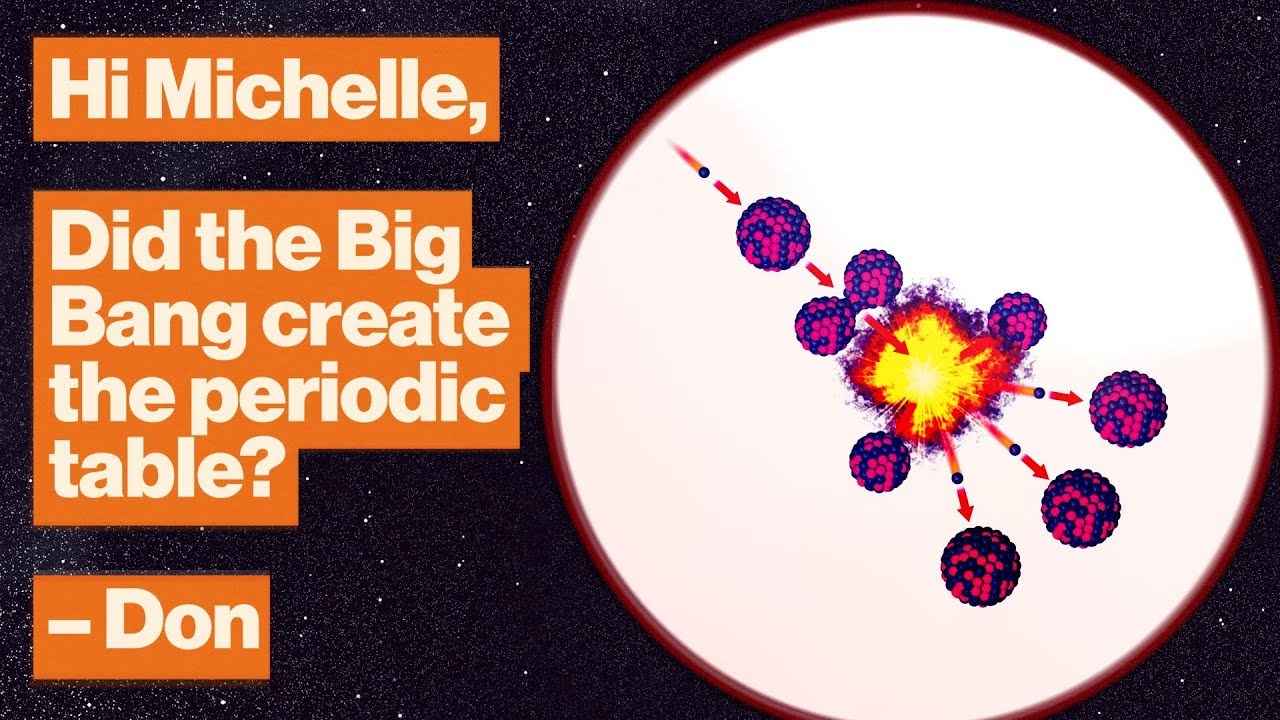 TED & Talks
Share on Facebook
Share on Twitter
Share on Pinterest
Share on LinkedIn
Where do atoms come from? Billions of years of cosmic fireworks
Watch the newest video from Big Think: https://bigth.ink/NewVideo
Join Big Think Edge for exclusive videos: https://bigth.ink/Edge
———————————————————————————-
Michelle Thaller’s “absolute favorite fact in the universe” is that we are made of dead stars.
The Big Bang, when it went off, produced basically three elements: hydrogen, helium, and lithium.

Every atom more complex had to be formed inside a star. Over time, stars such as the sun produce things like carbon and oxygen.

They don’t really get much more far off the periodic table than that. If you want to go any farther than the element iron, then you actually need a very violent explosion, a supernova explosion.
———————————————————————————-
MICHELLE THALLER

Dr. Michelle Thaller is an astronomer who studies binary stars and the life cycles of stars. She is Assistant Director of Science Communication at NASA. She went to college at Harvard University, completed a post-doctoral research fellowship at the California Institute of Technology (Caltech) in Pasadena, Calif. then started working for the Jet Propulsion Laboratory’s (JPL) Spitzer Space Telescope. After a hugely successful mission, she moved on to NASA’s Goddard Space Flight Center (GSFC), in the Washington D.C. area. In her off-hours often puts on about 30lbs of Elizabethan garb and performs intricate Renaissance dances. For more information, visit NASA.
———————————————————————————-
TRANSCRIPT:

MICHELLE THALLER: Don, you’ve asked a question that’s related to what I think is my absolute favorite fact in the universe, and that is that we are made of dead stars. And that’s literally true. The atoms in our bodies were actually created inside the cause of stars that then exploded, and died, or unraveled into space.

And so your question about the periodic table is very interesting. What was the periodic table like at the beginning of the universe, the moment of the Big Bang? Well, one thing I can say, it was a lot simpler. The Big Bang, when it went off, produced basically three elements. Almost everything was hydrogen. There was a little bit of helium, and a tiny, tiny little smattering of lithium as well.

So those three elements were around just a couple of minutes after the formation of the universe, but nothing else. And that’s actually not a theory. That’s actually something we can observe. One of the wonderful things about being an astronomer is, as you look out into space, farther and farther away, the light has taken longer to get to you. And the farthest we can see is actually back to a time only about 400,000 years after the Big Bang. And really, at that time, there was nothing but very hot hydrogen gas, and a little bit of helium and lithium as well.

So everything larger than that, every atom more complex had to be formed inside a star. Over time, stars like the sun are pretty good, over the life cycle, at producing things like carbon and oxygen. They don’t really get much more far off the periodic table than that. If you want to go any farther than the element, iron, you actually need a very violent explosion, a supernova explosion.

The cores of very massive stars and by that, I mean stars that are 10, 20, maybe even as much as 50 times the mass of the sun, their cores are much hotter, because the gravity crushes things down, and the temperature goes up many, many millions of degrees hotter than inside the sun. So these stars can actually form bigger and bigger atoms. The hotter the temperature, the denser the core, the more you can ram things together and actually form bigger and bigger atoms over time.

But there’s a very special thing that happens when you get to the atom, iron. And it’s something you’ve actually heard about but you may never have thought of. And that when people think about getting energy out of a nuclear reaction you’ve heard about fusion reactions. So like a fusion bomb, actually, takes hydrogen, fuses it together to make helium, and that creates energy. And that’s a nuclear bomb. The sun also runs on that particular reaction, fusing hydrogen together. But then you also heard that there’s something called fission. And this is how, say, a uranium bomb would work. A uranium nucleus has many, many particles inside it you actually get energy out of breaking it up and forming two smaller nuclei that are actually a bit denser, and they hold together better. And so you get energy out of breaking them apart…

To read the full transcript, please go to https://bigthink.com/videos/big-bang

357686312646216567629137 – Numberphile
What Fake Fragrances Teach Us About Sustainability
Why are three kids less common? Is it the car seats?
Rise of the Feminine Voice as the Key to Our Future | Cindy Watson | TEDxOcala
Feeding Frenzy – Paul McMahon